March 31, 2017By endcuttinggirlsadmin
Yes people, Your Frowns are very powerful and will now be used for good as the Joint UNFPA/UNICEF programme for FGM/C abandonment is set to launch a non-of-its-kind Photocampaign  on the 30th of March using the platform of Meets Media. 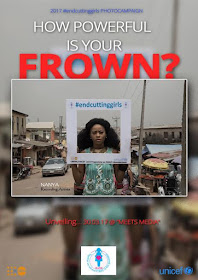